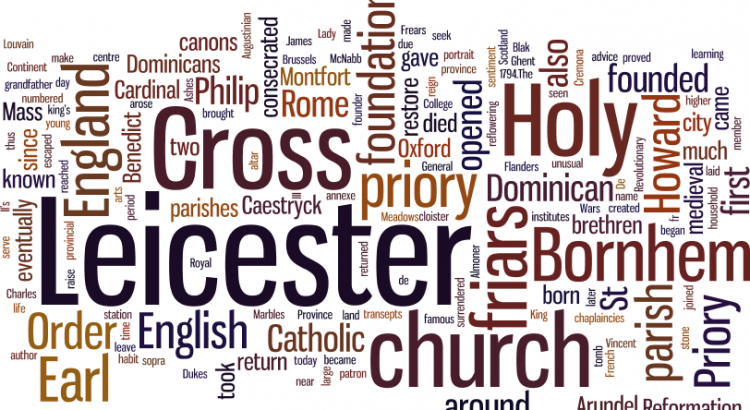 The Dominican friars reached Leicester around 1247. At that time the Augustinian canons at Leicester Abbey (of Our Lady of the Meadows) cared for all the parishes within the walls of medieval Leicester. Through a highly unusual arrangement, the canons gave the friars the church of St Clement, a poor parish between two arms of the river Soar. Through the benefaction of Simon de Montfort, 6th Earl of Leicester (the son of St Dominic’s friend, the homonymous 5th earl) and King Henry III, the friars built their priory around this parish church of St Clement’s. It became known as “The Blak Frears in the Ashes”, presumably because of the many ash trees in its grounds. In its medieval heyday the priory numbered thirty-three friars, and hosted three provincial chapters.
On 10 November 1538 the priory was surrendered to the king’s agents. Those friars of our province who did not apostasise fled to Flanders.

The first Dominicans to return to Leicester after the Reformation came from Holy Cross Priory, Bornhem, founded in 1657 in what was then the Spanish Netherlands. The founder was Philip Thomas Howard, born in 1629, a member of the family of the Dukes of Norfolk, whose title had been in abeyance since the reign of Elizabeth. He was brought up in the household of his grandfather the Earl of Arundel, known as the ‘Collector Earl’ because of his patronage of the fine arts (the ‘Arundel Marbles’ are to be seen in the Ashmolean Museum in Oxford). The Earl, being a Royalist, settled on the Continent during the Civil Wars.
In 1645, at Cremona, the young Philip took the habit of the Order, much to the displeasure of the Earl. His purpose was to restore the English Province, and it was for this reason that he eventually persuaded the Master of the Order and the General Chapter to allow him to seek a patron, the Count of Bornhem near Ghent, to make the first foundation of the English Dominicans since the Reformation. Howard returned to England as Almoner to Charles II’s Queen in 1660, but eventually had to leave England due to anti-Catholic sentiment. He was created Cardinal in 1675 and died in Rome in 1694. He was Cardinal Protector of England and Scotland, did much to restore the English College in Rome, and gave his unheeded advice to the headstrong James II. His tomb is in the church of Santa Maria sopra Minerva in Rome.

The end of Bornhem and the return to England

At Bornhem, a school for English Catholic boys and a novitiate and study house of the Order (a foundation was also made at Louvain) thrived until the arrival of the French Revolutionary army in 1794.The brethren and the Dominican nuns of Brussels, also founded by Howard, escaped to England. With them was Benedict Caestryck, born in 1762 at Poperinghe, a Fleming who had joined the Order at Ypres in 1784. It was he who founded the permanent mission of Holy Cross, Leicester, buying land there on which in 1817 he began to build the church, opened in 1819, and a presbytery, in 1824.
The parish and later the Priory took the name of Holy Cross, the dedication of the Priory and church at Bornhem. The relic of the true Cross which came from Bornhem is venerated at Holy Cross, Leicester, to this day. Benedict Caestryck died in 1844. His portrait hangs in the cloister at Leicester.

The reflowering of Catholic life in Leicester

Holy Cross was established as a priory in 1882. During this period the brethren opened Mass centres around the city; thus all the parishes in Leicester arose from Dominican foundations. By 1929 the first Holy Cross church proved to be too small for the congregation. So the famous preacher and author, fr Vincent McNabb OP, started to raise money for a larger church. Its foundation stone was laid in 1929, the choir and transepts opened and the high altar consecrated in 1931. The church was finally completed and consecrated on 14 May 1958.

Today the Priory of the Holy Cross is home to a large parish in the city centre, and serve a Mass station at the village of Woodhouse in a 14th-century chapel. We are responsible for the chaplaincies to two universities, the University of Leicester and De Montfort University, and provide chaplaincy ministry to the Leicester Royal Infirmary (see Chaplaincies page). The friars also undertake wider apostolates of preaching and teaching across the country, including at seminaries and institutes of higher learning, such as Blackfriars, Oxford.

The Priory of the Holy Cross is home to a community of Dominican friars, serving a large parish in the city centre and a Mass station at the village of Woodhouse in a 14th-century chapel.

The Dominican friars are active in the local community, including the nearby hospital, prison and schools, and provide chaplaincy for Catholic students at the University of Leicester and De Montfort University.

The friars are also active in outreach and education, including speaking on local radio, hosting the Leicester Theological Society, and teaching at seminaries and institutes of higher learning, such as Blackfriars, Oxford.